Mancunian Mark Haig has turned his childhood love for robots into an incredible business turning old hoovers, TVs, scrap metal and all kinds of bits and bobs into quirky robot sculptures.

Dad-of-one Mark is passionate about recycling, and as well as selling his unique sculptures, he runs workshops helping schoolkids to give a new lease of life to old unloved home items by turning them into the robots.

Look closer at the robots and you can see trampoline springs or old candlesticks for legs, old radios and wooden boxes as their bodies, sunglasses, clock cogs, door knobs and keys for the robot eyes, and old cake tins for their feet. 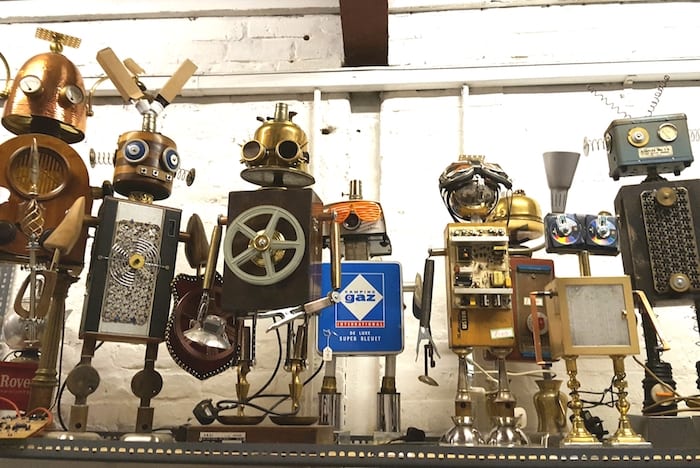 Although many are purely decorative, Mark also makes robots with functions – like speakers that can become a unique iphone docking station booming out your music, while others have lights for hands.

He also loves to take on bespoke commissions, with families often wanting to incorporate a special item – perhaps Grandad’s old work tin, or a beloved old camera – to make a unique present for a loved one.  You can also have the option of helping Mark to create the robot at a workshop from £80 for a two hour session.

Each robot has its own “story” and has its own issue number (he’s currently up to 897 for the larger robots).

Mark has been running his Gizmobots business for the past five years and can regularly be found selling his sculptures at Makers Market events in the Northern Quarter. This weekend he’s exhibiting at the Manchester Tattoo Tea Party at Event City.

He’s also been a regular face on TV on the programme Money For Nothing on BBC One, where entrepreneurs make cash from trash. 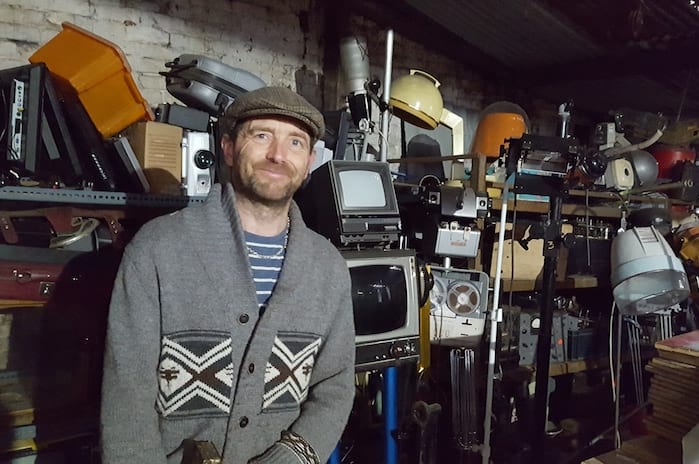 He laughed: “My Facebook and Twitter went mad after I turned up on the BBC!  Lots of people got in touch wanting me to make things for them.

“They’ve said they’d like to film again in future, so that would be great.”

Growing up in Bramhall, Mark’s dad was a clock repairer and his grandad a binman, which is where his love for making things started.

“From six or seven years of age my dad would bring me a grandfather clock home, and my grandad would bring me an old hoover, I’d strip them both down and in the afternoon we’d get a bits of Meccano and bits and bobs and we’d make space rockets, robots and steam engines together.”

Mark went on to train as an electrical engineer, and worked for many years in the CCTV industry, travelling around the world designing surveillance systems.  But the dawn of Madchester got him interested in combining some of his passions in a more rock ‘n’ roll way.

“In the late 80s and early 90s Madchester was taking off, and all my mates were in bands. I couldn’t play a note but I liked the lifestyle so I used to borrow surveillance cameras from work and made pop videos.  I liked this idea of building these installations with TVs inside them so I built a big robot and put them in all the trendy bars in Manchester and made a video magazine to play inside. 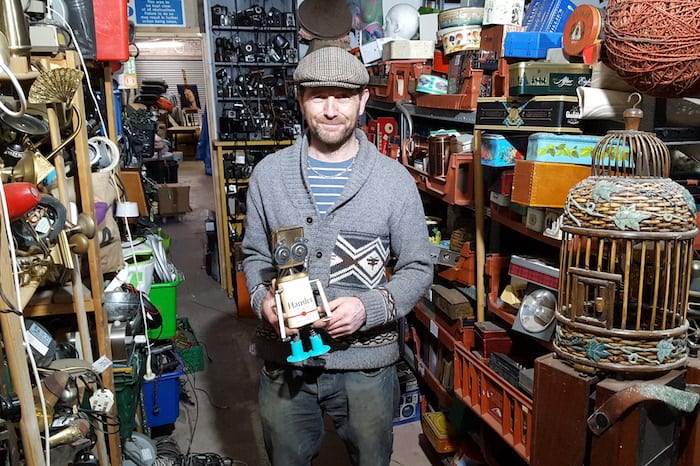 “They were in places like Generation X, Mantos and Afflecks Palace, I had about 15 around town at that time.  The idea was to make money through advertising as a form of video art. But while I like making stuff I’m not very organised and good at doing my marketing.

“I started film-making and making animations and then I got into the education and art world and I was using my engineering and teaching skills which I did for 10-15 years.”

But with more and more budget cuts in the arts and education world, Mark decided to set up on his own business creating robots and running workshops.

“I set up Gizmobots five or six years ago just as a sideline initially, but it’s now the major thing that I do.  When I can mix my video skills and do audio-visual pieces that’s nice, and it’s great to combine the teaching side too with the workshops I run.”

Mark, from Rusholme, recently moved to a huge new workshop in Wheelock, Cheshire, with plans to create a studio where people can book to come in to do full day robot workshops.

He has a mind-bogglingly vast collection of vintage bric-a-brac and waste electrical equipment like old hoovers, DVD players and ghetto blasters, all stored ready to be transformed into the next bit of robot body.

“I do a lot of car boot sales, a lot of junk shops, and I can’t pass a skip without looking in it.  I trawl Facebook for things people are giving away.  I got 20 old doors that I’m going to turn into shelves and tables.  I find stuff.  And I don’t throw anything away.

“But we’re too much of a disposable society.  People throw away almost brand new things without thinking about it.  It drives me up the wall.” 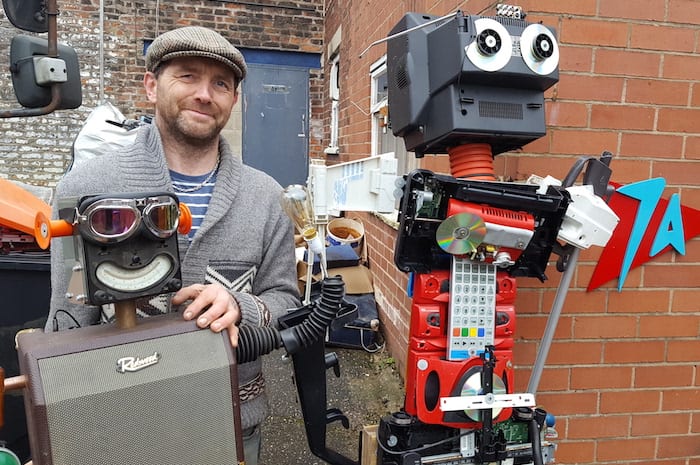 He’s passionate about teaching children how to fix rather than simply throw away household goods.

“At the school workshops I teach the children how a hoover works and how to fix it. Most hoovers, there’s only three things that go wrong with it, but millions get thrown away every year just because people don’t know how to fix them.

“Then I teach them how to dismantle it all, and we categorise all the little bits which we can add on to a wooden frame as the skeleton for the robot, and they get to keep the completed sculpture for display at the school.”

He teaches kids about the importance of recycling, and would love to work more with recycling authorities to get a more ready supply of waste electrical items for his workshops.  But at present he puts shoutouts on his Facebook page for any old broken hoovers and then drives out to collect them.

He has hundreds of robot sculptures ready to buy priced from £30 for small robots, £150-£300 for the larger sculptures up to the very large life-sized robots made from old TVs that can cost up to £850.

Mark says: “I love making the larger robots but I don’t sell too many of those.  But in my head the marketing manager of Diesel is going to see me one day and say ‘can I have one of them in every one of my shop windows?’.

“I haven’t met him yet, but if I do meet him that’s what’s going to happen,” he laughs.