I confess that, as a lunchtime pie and a pint man – oh alright, three pints – afternoon tea has never really figured in my life.

It always seemed to me to be a rather twee affair for people untroubled by the world of work, sitting amid the aspidistras in lofty-ceilinged Victorian hotels in somewhere like Eastbourne.

I once enjoyed a rather splendid version on board the Queen Elizabeth while the chamber orchestra played Vivaldi, as the vessel steamed from Singapore to, appropriately, Sri Lanka. But then on board a ship like that passengers do tend to squeeze in meals between meals.

But I was recently won over by the sheer gentility of the occasion – and the delights of the tiered platter – in the elegantly charming ambience of Oddfellows On The Park in Cheadle.

For when it comes to afternoon tea, the design-led boutique hotel in Bruntwood Park has significantly upped the ante by hiring Clement Barbin as head pastry chef. 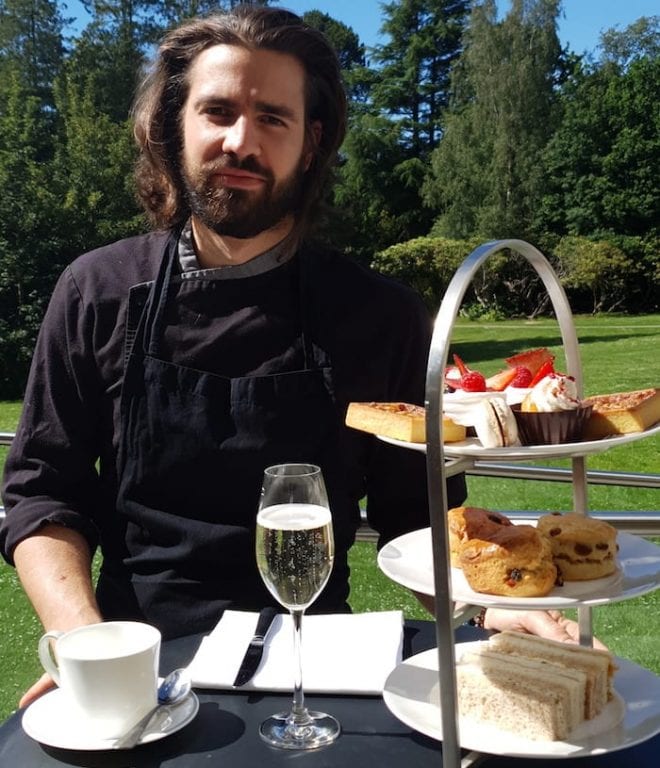 He’s joined the team at Oddfellows from Bisous Bisous, the highly-regarded French patisserie in Didsbury, but also has a wealth of experience in Italy and France – including a stint as pastry chef at the two Michelin starred restaurant, Miramonti l’altro in Brescia.

Clement was highly trained in France, gaining a CAP (certificate d’aptitude professionelle) in both bakery and pastry and a mention complementaire (specialism) in pastry, chocolate work, ice cream and sugar work.

Heading up the pastry department for both afternoon teas and in The Galloping Major restaurant, Clement sits under head chef Ross Chatburn.

Ross said: “Clement is a massive talent and I’m delighted to have him join our team. Afternoon tea is an ever-growing and seemingly never-ceasing phenomenon. Lots of restaurants have quirky versions but my aim for Oddfellows On The Park was to take it back to its traditional roots.

“Although it’s a very British tradition, the best afternoon teas in Victorian times would have been created by a French patisserie team – because they were the best. It is only the very brilliant pastry chefs who can take a simple, classic recipe and make it taste amazing.”

On the Saturday afternoon we indulged beneath the Galloping Major’s beautifully ornate plaster ceiling, Clement’s exquisite handiwork did taste amazing. 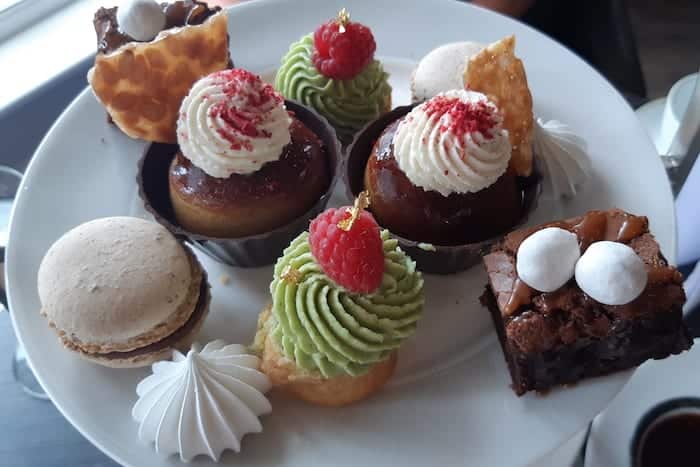 Traditional afternoon tea is £22 a head – or £26 with a glass of Astoria Lounge prosecco – and comprises a three tiered stand filled with dainty finger sandwiches, freshly baked scones with jam and clotted cream and topped with a selection of sublime sweet treats.

They do a savoury version for the same price including ham and pickle and fish finger sandwiches, scotch quail’s eggs, pork crackling and cheese scones, but this option requires 48 hours notice. So, if you’re of that persuasion, think on…

After the traditionally-filled, neatly cut finger sandwiches – coronation chicken, smoked fish and egg mayo – we got stuck into the scones, fresh and crumbly, in the Devonian fashion (cream on first, then the jam).

But the jewels in the crown were the little cakes. Truly things of beauty. Chocolate macarons, gems of just-so meringue, brownies topped with iced hazelnuts, rhum babas in chocolate cups and choux pastries filled with light-as-you-like swirls of pistachio cream, topped with fresh raspberries and decorated with gold leaf.

Mrs K had a prosecco served in an elegant saucer glass, and I chose a French viognier (£10.50 for 250 ml) which came in a mini carafe before the tea was poured, our choice fragrant Planters Earl Grey.

Outnumbered 12 to one by women, I felt entitled to wonder where you girls put it all. As it was, we required a box to take home the cakes we couldn’t manage.

Eating at the Galloping Major has pretty much become an all day affair. Apart from afternoon teas, menus cover brunch, sharing platters, lunch, sandwiches and salads.