We all loved watching Manchester chef Adam Reid get through to the finals of TV cookery competition Great British Menu to represent the north west.

But another star emerged from the show, too. Adam’s winning dishes were served on striking bespoke pottery, handmade in Salford by Ian Wild.

Throughout the late 80s, during the Madchester scene, Ian worked as a sound engineer for the Stone Roses, Happy Mondays, James, World of Twist, Inspiral Carpets and more. These days, he spends most of his time producing hand thrown pots fired to stoneware temperatures.

“As part of some Roses shows we did – I think it was in Norwich – we did a gig at an art school,” he recalls. 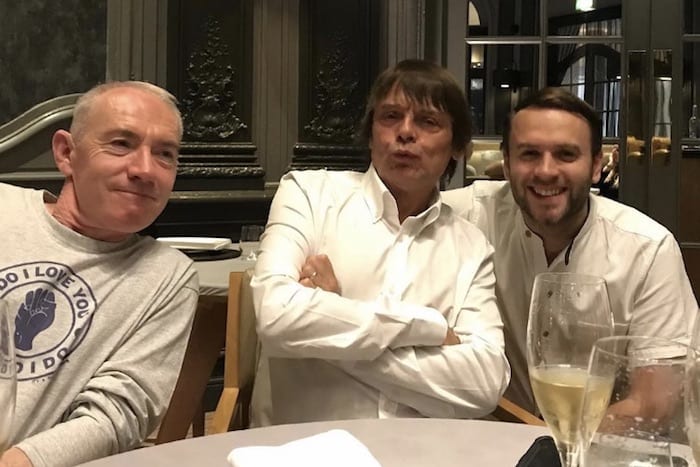 “The students were all away for summer, but we were staying in the student accommodation. And being the naughty boys we were, we started exploring the art school at night after the show.

“We found the pottery department. As a kid I was always interested in art. I had always thought the pottery equipment looked exciting, but I was never allowed to use it. Suddenly, I had my chance.”

Ian found he had some spare time after the Stone Roses released their first album, thanks to a series of legal issues and injunctions between the band and their record company.

“So during that time I did a three-year BTEC course in ceramics at City College Manchester, and then I went on to do a degree course,” he says.

“And since then I’ve been a potter as well as a sound engineer. These days I do more of the pottery than the sound engineering, but I do still do both.” 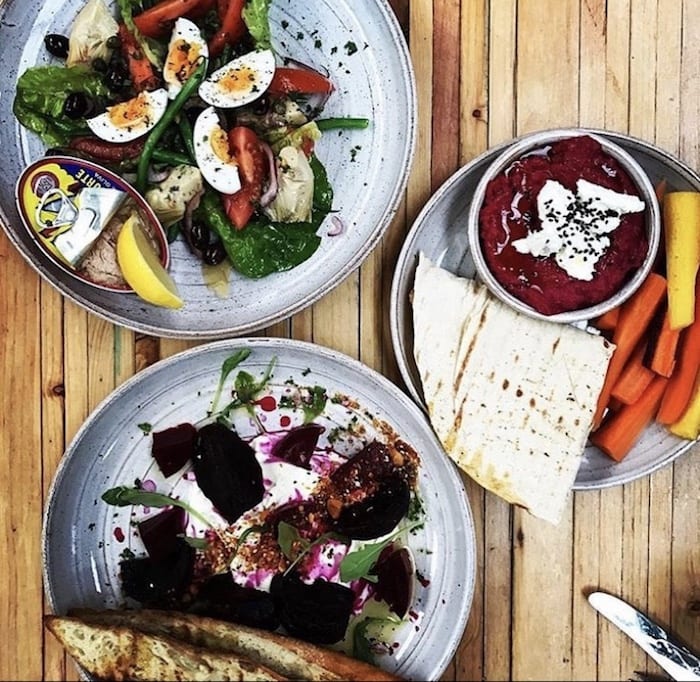 Ian was delighted to collaborate with chef Adam at The French for Great British Menu, and the brief was especially fitting.

This year’s series has a musical theme, marking the 50th anniversary of the last time The Beatles played live together, and celebrates Britain’s continuing success as a world player in music.

Adam’s dishes – including tater ‘ash (a dish he called ‘From The Beatles to Oasis’) and a reinvented treacle tart (called ‘Madchester – I am the Resurrection’) wowed both viewers and judges. 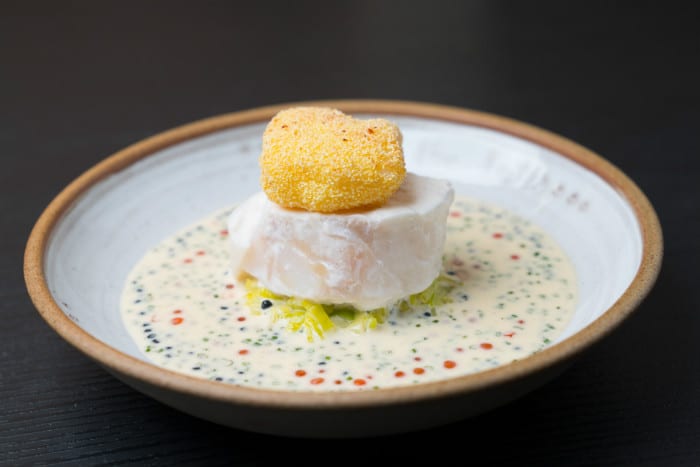 “It was fabulous seeing my pottery on TV,” says Ian.

“Adam really wanted to celebrate musicians in the north west, with him being in the north west heat and that’s where he’s from. So we concentrated a bit on Madchester, the Happy Mondays, the Inspiral Carpets, the Stone Roses and all those people.

“But it came to be a really big celebration of rock ‘n’ roll.” 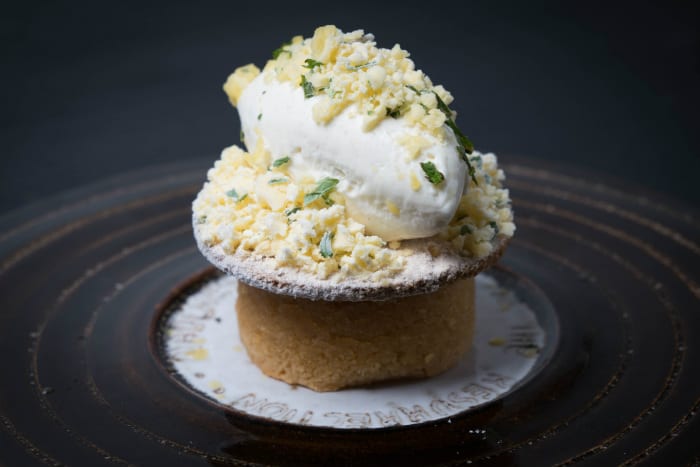 Since the show, Ian has had more customers asking for specific items that they’ve seen on the program, he says.

“We’ve had people travel from different places across the UK because they’ve seen it on TV, and I’ve also had a lot of queries from people wanting to buy on the internet. But I just have to say to them, ‘it’s not available online’. It’s become a bit of a catchphrase.”

Indeed, there is only one place people can buy Fire Station Square pottery.

“We only sell on Altrincham Market,” says Ian. “And I don’t sell in any shops or galleries anywhere.

“At first I didn’t sell online because of the practicalities of posting ceramics and insuring it, it was a lot of hassle, but as time went on I found myself so busy that I can’t make any more stock than I make now. 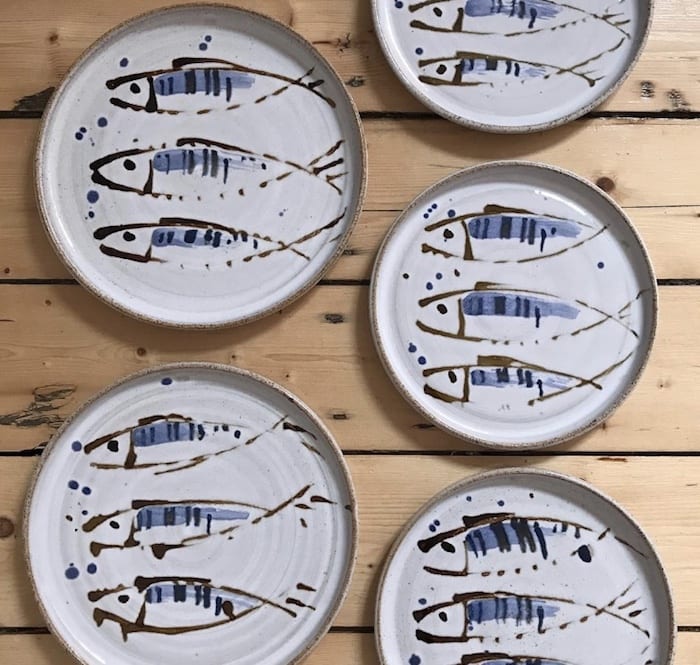 “When Adam first saw my stuff, I was doing Manchester Christmas markets which I did for years. But once I started doing Altrincham, I got to a stage where I had to choose one or the other, because I couldn’t make enough stock to do both. There’s only so much one person can physically make.”

Ian loves Altrincham – “it’s a fantastic place, great for people who are foodies, and a lot of my work is used in the restaurants there, too” – and he is equally complimentary about Manchester.

“I think Manchester is the greatest place in the world, I honestly do,” he says.

“It’s a fabulously industrious, cutting-edge place, and yet it’s small enough to be familiar. You see the same faces around town and you get to know people. 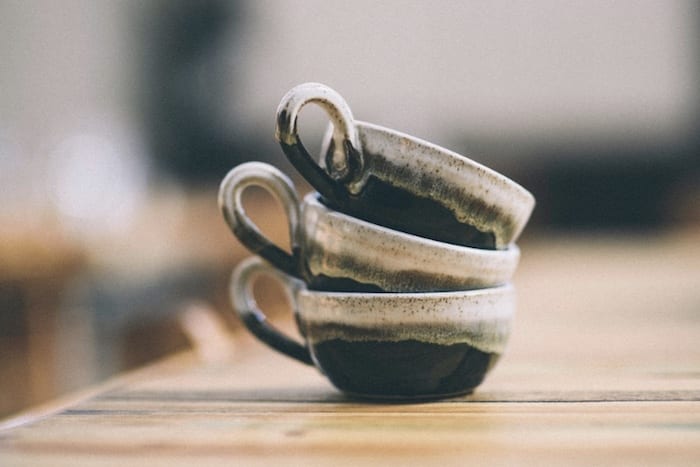 “In London, it’s so big, you can never really feel like you know the city. Whereas in Manchester you do. But you’re not in a place that’s a bit behind the times, it’s all there.”

Ian lives in Salford with his wife Angela Matthews, who he had previously worked with when she was the entertainments officer at Manchester Poly before she went on to manage clubs including the Boardwalk and the Hacienda.

“We’re a good team together,” says Ian. “And to be honest, people come to the market to see Ang as much as they do the rock ‘n’ roll potter.”

So is pottery really the new rock ‘n’ roll?